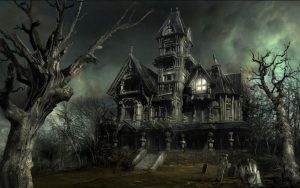 Time for a story!

Once upon a time… there was a man who decided to go to a self-help workshop on his thirtieth birthday. The facilitators told him that he needed to confront his fears. On his way home, he racked his brain to think of his biggest fear so that he could confront it. Suddenly he remembered the old house on the edge of town. Everyone knew it was haunted, and ever since he was a child he had been terrified of it. He had heard such awful stories of what went on inside that he was afraid of even going past it and habitually took the long way back from work just to avoid the house.

After much thought, he decided that this was his biggest fear, and that in order to confront it, he would have to spend a night there. Everyone thought he was crazy, but he was determined to complete the workshop’s assignment. He packed a flashlight and sleeping bag into his knapsack and set off down the road, as clouds covered the moon, leaving him walking alone through the black, starless night.

As he reached the huge iron gates, his heart began beating faster, but he was determined. He pushed open the creaking gates, walked through them, and made his way down the path leading to the yawning black chasm of the shadowy doorway. He jumped in fright as the gates slammed shut behind him, but he continued on his way.

The house was huge and ominous in the dark, its old shutters hiding its contents from view.

As he walked into the gloomy hallway, a wind started to whistle through the corridors, whisking a heavy dust into the air and shaking the cobwebs that hung from every corner.

Making his way up the creaking staircase, he stopped more than once, convinced that one of the shriveled old faces of the many hanging portraits had turned to glare at him with distaste. Pulling himself together, he continued his journey, up into the attic. He was determined to look his fear right in the face, and although he was shivering all over, nothing was going to stop him.

When he finally reached the small attic room at the top of the winding stair, he set out his sleeping bag and settled down for the night. This isn’t so bad after all, he thought, drifting off into a warm, deep sleep.

Suddenly, he was jerked awake by a huge crashing sound. Frightened and disoriented, he jumped up and listened at the door. His heart almost stopped when he heard the heavy footsteps — boom, boom — making their way up the stairs. As he started to imagine what sort of terrible beast he was about to behold, a strangled wailing sound floated up from the stairwell, accompanied by a rattling of chains. Shaking with terror and realizing there was no way out, he heard the monster climb straight up to the room where he was cowering.

Just as the monster was about to reach the door of the room, he made a decision and told himself, I don’t care how horrible the monster is; whatever comes through that door, I am going to give it a great big hug!

In that moment, he woke up. Warm morning light was pouring through the old shutters.
There had been no monster; it was just a dream!

When you dare to embrace the monsters that haunt you, they disappear.

Why are we so afraid to feel fear that we let it control our lives?
Why is it so hard to face our inner demons?